Vj rarely gets a long leave. When he does we try our best to make the most of it – meeting as many relatives and friends as possible and exploring a place or two simultaneously! We spent Christmas at my mom’s childhood home along with her six siblings and their families at Karaikudi. On our drive back to my parents’ house in Thanjavur, we took a detour to Danushkodi Island via Mandapam Camp!

We witnessed the most spectacular Annular Solar Eclipse on our drive! It was the very first time Vj, kids and I witnessed one and it just SURREAL! 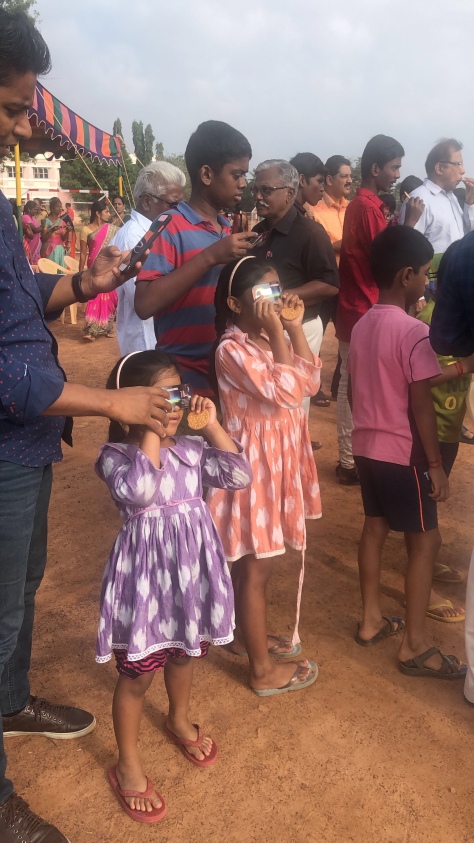 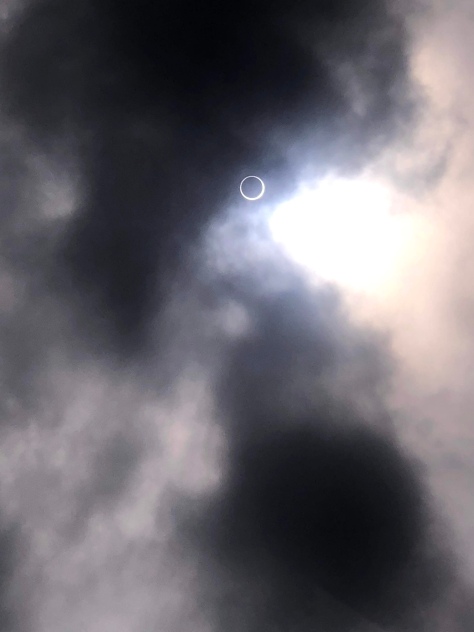 Mandapam Camp was built in the early 1900s by the British Government to house migrant plantation workers coming to India from Sri Lanka.

My Granddad, Dr. S.V. Job, worked as a research scientist at the Mandapam Camp Fisheries between the years 1955-58. As we drove through the little coastal town, my dad recalled many childhood memories and his little sister, Phebe Daniel, being born there. As my daughters were enthralled in his stories, I could picture my dad as a cute six year old, running and planning inside the Fisheries campus and the lonely beach!

As we made our entrance into the Fisheries Campus, we noticed a group of men having a chit chat. My dad walked up to them and introduced himself. To all our complete surprise, the dads of all those men had worked for my Granddad and they quickly recollected their dads mentioning my Grandpa’s name! It was such a special moment listening to them catching up with their yesteryears!

One interesting fact, or do I call it one of life’s amazing coincidences – my paternal Granddad, Vijay’s both paternal and maternal granddads worked in and around that little town around the same time. Mr. R. Ranjit Peter, Vijay’s maternal granddad, served as a Station Master in Rameshwaram, Pamban, Danushkodi and Thangachimadam between 1949-52. Mr. D. Muthaiyah Sam Raj, Vijay’s paternal granddad, served as a Postmaster at Pamban Post Office between 1951-53. I wonder if they knew each other. They would have had no clue that decades later their grandkids would be marrying each other!

Our history with Mandapam Camp does not stop there. My dad, Noel Job, worked there briefly for the YMCA in the Sri Lankan refugee program in 1984 for few months. As a toddler, me and my mom used to visit him on weekends.

Later as a school girl, we have visited it twice with my uncles families. How I cherish those trips, our fun long drives and the goodtimes I had with my cousins!

The Mandapam Camp Fisheries has a small aquarium and museum. If you ever happen to drive to Rameshwarem or Danushkodi, be sure to have a pitstop here. The kids will love it!

There were a few fishes for display. However, the turtles stole the show. My girls were in a state of wonder when they got to touch the turtles! 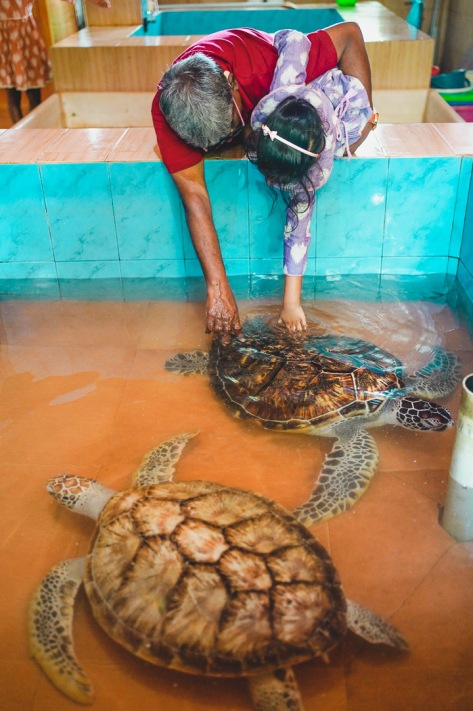 K&K have always been fond of seashells. They went through all the shells and corals that had been placed for drying outside the aquarium.

My mom is someone who notices the little things and finds beauty in it. She picked the shells and showed the kids the beautiful little patterns and colors on the shells. It’s moments like these with my mom that has taught me to look for, appreciate and value little things in nature!

Having grown up in a township, any quiet campus that has a lot of trees and is clean, instantly relaxes me. The fisheries campus is one such. The museum is just a few minutes walk from the aquarium.

Although it’s a very old museum, it is still pretty well maintained and showcases some very interesting specimens. The skull of a large whale would be present at the entrance. It is something I vividly remember seeing as a little girl.

It was around 03:00 pm, we had been driving all morning and we were super hungry. We kept googling for a good seafood restaurant in Rameshwaram. We had already driven past some good ones and didn’t find any that appealed to us. We then remembered my mom’s sisters highly recommending we eat at the “Paati Kadai” (Translated as ‘Grandma’s Stall’) at Danishkodi.

As we neared Danieshkodi. We noticed a lot of little shacks on either side of the road. These little food shacks are run by the families of fishermen. We diligently searched for the much-talked about Paati Kadai and found it!

Although Paati was not around, we were warmly welcomed in by her daughters and grandson. They showed us an array of fresh fish and prawns. As it was late afternoon and due to the constant inflow of tourists, there were no more varieties left! 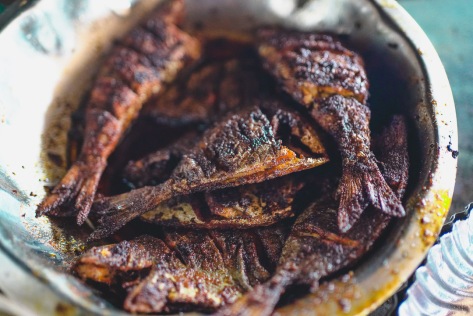 Once we chose the variety of fish and prawn we wanted, they mixed it with a simple mix of spices, fried it and served it with steaming hot rice and Meen Kolambu (Fish curry) that was finger licking good! 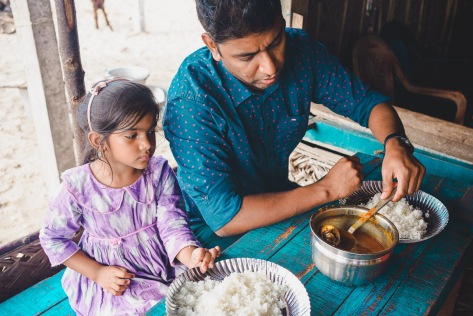 As I am someone who savors food, the taste of the simple meal we enjoyed that scorching hot afternoon, has been registered in my head and I can still recall its exact taste! 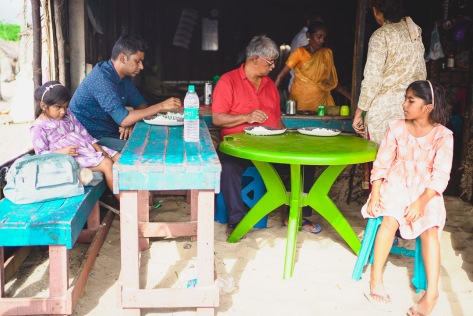 Despite our trip being in December, which is technically winter, the heat was just UNBEARABLE!!!! We couldn’t comprehend how scorching it would be in summer. We drove to the tip of Danishkodi. It was packed with tourists. Seeing the crowd and the heat, we did not dare to venture out of the car. We drove back to a lonelier stretch of the beach, parked it on the side of the road and waited patiently for the sun to start setting.

Dhanushkodi is an abandoned town at the south-eastern tip of Pamban Island of the state of Tamil Nadu in India. It is south-east of Pamban and is about 24 kilometres (15 mi) west of Talaimannar in Sri Lanka. The town was destroyed during the 1964 Rameswaram cyclone and remains uninhabited in the aftermath. It shares the only land border between India and Sri Lanka, which is one of the smallest in the world at 45 metres (148 ft) in length on a shoal in the Palk Strait. (Source Wikipedia) 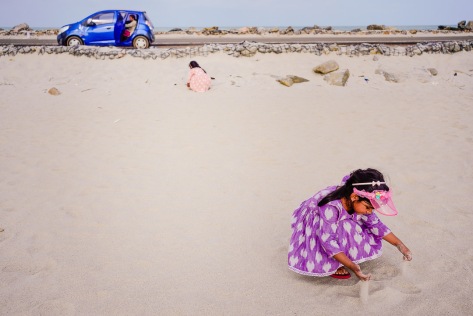 Flanked by the Indian Ocean on one side and the Bay of Bengal on the other, Dhanushkodi was once a bustling and flourishing town – with houses, schools, church, temple, a post office and a railway station. Thousands of people resided in this tiny town, known as one of the richest fishing belts in the country. (Source: The Culture Trip)

Post the 1964 cyclone that wrecked this town, the town is left in ruins. (Check out pics of the above Culture Trip link). Such places intrigue me and I really wanted to visit it. However, the moment my girls set foot on the beach, their joy knew no bounds.

I am not sure if it was the weather that day – half the sky was cloudy and the other half blazing in the sun’s glory, or if it had to do with the appearance of the beach – it was clean, not a single vegetation, just sand… the beach appeared spectacular in a very unique way! 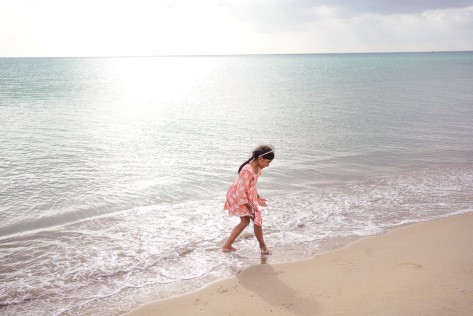 I was in complete awe of how the sight of the ocean awakened my kids’ spirits. I guess that’s the power of nature. Standing there watching them I couldn’t help but wonder how a child could be positively impacted when kept close to untouched elements of nature! 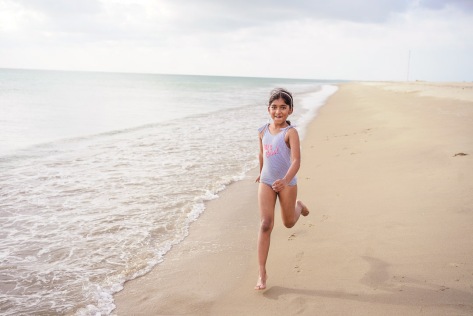 2019 gave us a lot of good memories and a good share of learnings. As I let the waves crash on my feet holding my daughters, Vijay and my dad, I was overwhelmed with gratitude for the gift of life, family and that exact moment in time. 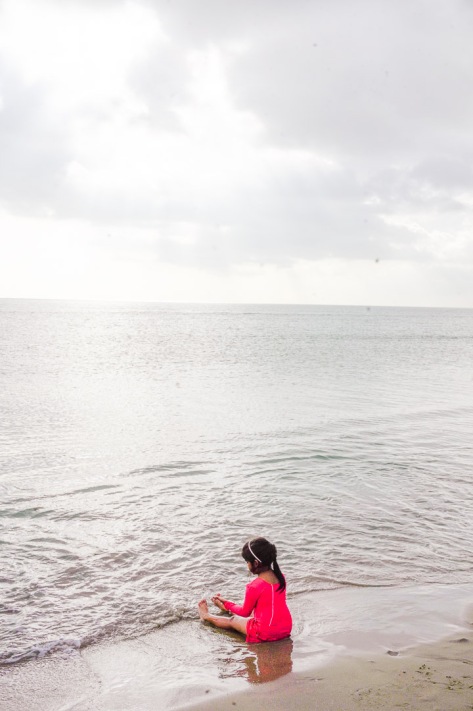 Oh yes! And I did make a wish – I wished someday I could escape with my family the concrete jungle we are in to somewhere where we can be nestled and cradled in the arms of mother nature.

Leave your worries by the shore line,
And run your bare feet through the sand,
Let the water be a soft bed,
When you cannot bear to stand,
Make friends with the flying seagulls,
And hold the sun up on your palm,
Before you duck beneath the water,
Tell the fish all of your problems,
As they all come swimming past,
When your lungs are close to bursting,
Swim above the waves and gasp,
Let the water hold your sadness,
And wash it right out to sea,
So like a message in a bottle,
All your worries are set free,
And the sea might make you feel alone,
But the world has troubles too,
For how else do you suppose,
That to ocean got so blue?
[e.h.]

The greatest adventure is what lies ahead.
Today and tomorrow are yet to be said.
The chances, the changes are all yours to make.
The mold of your life is in your hands to break.

The greatest adventure is what lies ahead.
– The Greatest Adventure, also known as The Ballad of The Hobbit, a song written by Maury Laws (music) and Jules Bass (lyric)